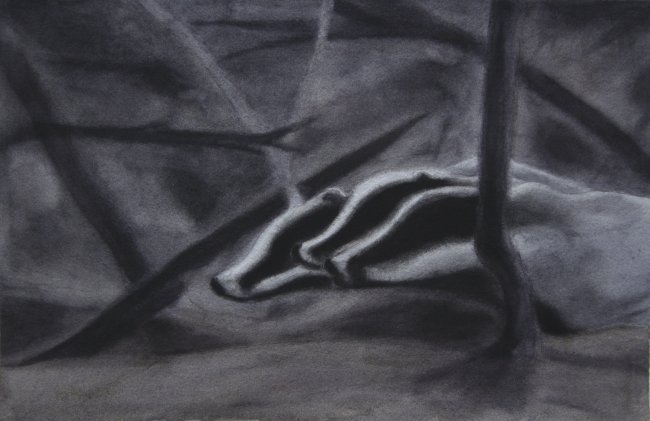 It is 8:00 pm, 27th of March 2020. Between two Black Bird calls I can even hear the sound of the claws in the fur when they scratch. The world has become silent, at last. Silence of all human activities. Our world is on pause. No cars on the roads, no planes in the sky. I am enjoying the peaceful routine daily life of this bagers family.

I have been waiting for one hour-and-a-half near the sett, a pencil in my hand, paper on my lap. The sun is gone, the light is declining and thus starts the race against time. Are badgers going to come out before it is too dark ? In the woods it is almost night already when four of them emerge. Despite the obscurity, the black and white stripes are contrasting beautifully in the vesperal fuzziness. Immediately they start grooming themselves and each others mutually. Once it is done, three of them turn back in the same direction. Have they heard something ? I don’t know. The white and black stripes are merging in one another. It is dark but my bright binoculars allow me to enjoy the scene. I try to focus during the few secons I have to take it all in and draw as I can, almost blindly with few quick strokes on the paper. No more time, no other chance. They are already gone to eat.

Two months and a half later, I eventually take the time to paint this image in watercolor trying to transcribe this soft atmosphere.

At the same time, a national campaign aims at stopping badger’s hunt in France. Yes, badgers are hunted, 22 000 are killed each year. They shoot or dig them out. The later means that while badgers families are sleeping in their sett, sometime multi-centenarian ones used generations after generations, one tears it to pieces to open the ground wide so one can catch them with pliers and kill them. Dogs give help in the all process and take their share of course.

The reasons of such a hunt : to feed oneself ? No. Because of crops damages ? Very low and never properly estimated. Diseases ? Hunting increase their spread. Scientific research ? Not at all. Tradition ? Oh yes. But whose tradition is it, when the vast majority of the Frenh population rejects this practice ?

So, whether your are a nature lover or not, go in the countryside arround your home. Discreetly rummage through the smallest woods following the narrow paths drawn by animals. Because at the end, you could find a borrow. Then, one evening, dressed up all in dark, binoculars around your neck, sit still against a trunk, at a reasonable distance from the sett, keep your eyes wide open and wait. After the sunset, you could see those black and white heads emerging. And then, naturalist or not, inevitably, you will feel this excitement mixed with marvel. And eventually you will feel angry and you will fail to understand why people still hunt this peacefull animal.

As any hide, you won’t probably see them the first time and you will have to go there again. But it is never going to be a waist of time, because sat in the undergrowth you will observe Nature running its own course without waiting for us.