Blind to the familiar 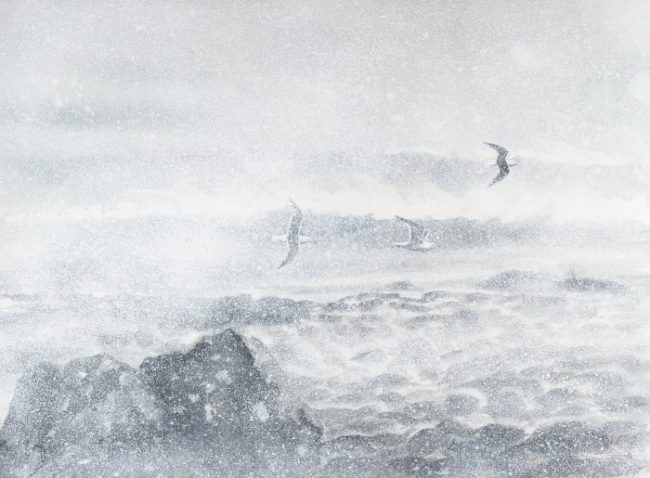 Sometimes the familiar is exceptional and we contemplate, fascinated, what we thought we knew. We then stop seeing and start looking, imagining, understanding.

Everything in this morning of April 6th is outstanding. I stand on the doorstep, drunk by the tiredness of a storm that didn’t let me sleep, hustled by the wind, blinded by the snow. Where did the first days of spring go? Backpack, binoculars around my neck, telescope on my shoulders, I am crossing this blizzard to join the observatory. Four days now that I am counting migratory birds here in Lista, southern Norway. The sea is a few tens of meters ahead of me and yet I barely discern the waves whose foam is blending to the snow that erases everything.

And yet, behind that white wall, light shadows appear and disappear in plumes of snow. Facing the wind, the struggle seems fierce and the fight largely unequal. The bodies are shaken, the wings are bending under the force of the wind, the feathers twisting against the gusts. The violence of this struggle suggests the strength of their determination. Metre after metre, they progress towards a north ten, hundred, even thousand kilometres away, and which must be reached as soon as possible. With only the strength of their bodies, these gulls are migrating in the storm.

Yes, gulls, simple mundane gulls. These birds that fill the coastal landscapes with life or act as garbagemen in our cities. We no longer look at these birds because they are terribly common and not particularly remarkable. Even for the ornithologist that I am, a Herring Gull doesn’t evoke anything very exotic or exciting in me. Yet this morning, looking at this scene, I have no words. I am contemplative and I am fascinated. The word ′′gull ′′ suddenly becomes more magnificent. Throwing myself on paper I trace with my frozen hands a few quick, abstract strokes, forming a picture I hope to paint later. Another one of those precious moments I wish to remember.

As the birds follow each other, I immerse myself in their struggle. I look at the detail of their flight, I scrutinize their attitudes, their swerve in the wind, being pushed back and then forcing forward even harder. Suddenly, without realizing it, I am imagining what being a gull is like at this very moment. Beating wings constantly, with all the strength you can, avoiding being crushed on the rocks, rolled in the waves or thrown backwards. Beating wings over and over, snow lashing the plumage, the heat of the effort countering freezing temperatures. Fatigue that adds up over hours, exhaustion. When will be the next break to eat, to drink, to rest? Going along the beach to this tip and then what? Crossing the sea blindly or following the coast?… And could there be doubt, apprehension, discouragement, fear?

In short, it is the end of the gull as I used to see it, with identification criteria for such species, the gull calls that escort walks on the beach, the gull that follows the fishing boats, or the gull to which I give the rest of my sandwich in a park… No more making it a decoration in the landscape of our human activities. It has its own existence and a huge share of unknown that I do not suspect. It took me this wild storm to understand that.

And out there is a whole world spinning without us. We can choose to see it through the scope of our knowledge and beliefs, or we can start observing it, truly observing it, without adding anything else, be it a gull in the storm, a bear on the ice, a landscape , a loved one or a stranger. Letting some of what we observe enrich us. Not influencing the world anymore but letting it imprinting itself in us, even a tiny bit. Inviting this step aside to stop being blind to the familiar and marvel, even a little bit.